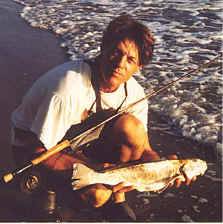 Gary grew up on the beaches of the Southern California coast, His father took him camping and fishing once a month as a kid and his mother was an avid saltwater fisher. She was a member of the Newport Lady Anglers and even took trips to Baja to fish in the 1960’s.

Gary’s wife, Theresa, was an innovative teacher whose specialty is marine biology. In the eighties they both met Yvon Chouinard because he was impressed with Theresa’s teaching methodologies, he invited them to Wyoming where he taught Gary how to cast a fly rod on the Snake River. Yvon and Gary returned to Ventura and fished in the surf for perch.

Gary found salt-water fly fishing to combine his long-time love for the ocean and his passion for fly fishing with the convenience of having fish right at his back door.

He quickly realized that there was not a great deal of information out there about catching west coast salt-water species on the fly and began to use his knowledge of tides and tidal life to not only chase down surf perch, but corbina, halibut, striped bass and white sea bass.He realized there were fly fishing opportunities right along the shores of Southern California that would provide a great recreation, with some awesome challenges for the flyfishers of the area. California corbina were the most interesting challenge. They were visible in the surf line-and difficult to fool. Perfect!

Over the next few years, he spent his early mornings and late evenings patrolling the beaches, trying to develop presentations and flies that could bring to hand the corbina on a more consistent basis. He began guiding others and holding seminars on surf fishing. Through his website and a small community of hard core surf fishers the information on fly fishing the surf exploded, and so did the number of flyfishers walking the beaches. He also began cruising the kelp beds in his kayak, and developing flies that would attract the many varieties of fish found on the So. Calif. Coast.

In 1989, Gary began accompanying Theresa on expeditions with her students camping on Baja’s Magdalena Island the southernmost bay where gray whales migrate to give birth to their young. He brought a fly rod and he became astounded at the incredible variety of fish that were available in the waters of Baja. He met the Lucero family at Punta Arenas in Baja and showed them the first fly rods they had ever seen. Their relationship quickly deepened as the Luceros shared their deep knowledge of the Gulf of California and together, they developed successful flies and methods of fly fishing . Friends, and clients who became friends were more numerous every season.

He now spends spring, summer and fall hosting and guiding all inclusive fly fishing trips at Punta Arena/Cerralvo Island (in the Sea of Cortez) and other international destinations. For a dozen years, he guided kayak fly fishing trips to Magdalena Island, Espiritu Santo Island or San Jose Island. 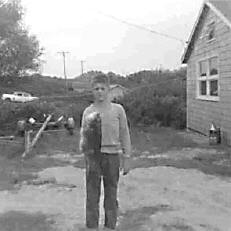 His photos have appeared in The Drake Magazine, Fly Rod and Reel, Patagonia Catalog and more. Southwest Flyfishing Magazine published his feature article with his photos on “Flyfishing the Santa Barbara Surf” in their January/February 2106 issue.

When Gary is not working the salt he is at his home and in his woodworking studio in Ojai, California.

You Will Love Fly Fishing With Gary In Baja California Sur